Cast iron’s story starts about 1000 years BC, where the oldest iron castings have been found in Asia. Spearheads of iron, however, has been found as far back as 4000 BC.

When it succeeded to control the melting-practice of iron in simple furnaces, what we know as the Iron Age started. This is about 500 years BC, where also the first real uniform castings dating back to. Iron Age lasted for about 1300 years. The first years cast iron was primarily used for weapons and cookware, which still today are some of the possible applications. Cast iron has, however, evolved from being processed iron ore until today to be produced using a controlled thermal and metallurgical process, with great consistency.

Cast iron is up to the steel introduction in the late 1800s also widely used in both construction and simple machine construction. The excellent characteristics for cast iron to resist wear and decomposition. Some of these early casted parts can still be found in houses and bridges which are more than 100 years old.

The primary difference between iron and steel is the carbon content, in cast iron it is between 2 and 4%, where in steel it is about 0.5%. In our foundry we produce more than 30 different alloys within the specter of Cast Iron these, having different thermal wear or rupture properties which make it possible to replace such materials as steel, plastic or wood with cast iron.

Today the use of cast iron is widely industrialized and is extensively used for engines, flanges, pumps, bearing housings, brake parts and much more. Cast iron is easy to machine compared to steel due to the high carbon content, furthermore cast iron is considerably easier to manufacture and hence less expensive. In fact we can without blinking say that the world would stand still in almost all areas if the cast iron was not as widespread as it is.

When going for mass production of cast iron items the first part of the process is to produce a pattern that resembles the objects geometry. Patterns are often divided into two and always around 1% larger than the desired item as cast iron shrinks 1% during solidification / cooling (however geometrically and alloy-dependent). If a pipe is to be made (see graphics), then additionally a core box has to made, which can create a sand core, which can form the hole in the pipe.

Patterns can be made in any stable materials such as wood, plastic (also 3D-print), aluminum, iron, and even styrofoam if the pattern is to be used only 1 time.
In order to make a cast iron item a mold in a heat-resistant material is produces which can withstand the pouring of around 1400 degrees hot iron. The molds at Uldalls are always made of bonded sand, the pattern is therefore only used to make an imprint in the sand the pattern must be made with taper so it can be removed from the sand without damaging the mold. This imprint in the sand is called a mold and is used for casting the liquid iron.

Today, there are 3D printers that can print a mold directly in sand, thereby patterns are obsolete. This is sadly still a very expensive process and therefore only used for prototypes. 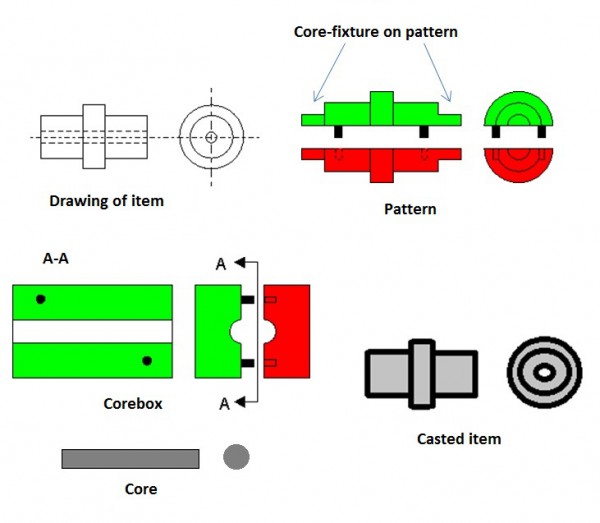 If you have questions or you are in doubt, Uldalls Jernstøberi A/S 'competent employees are ready on both phone and email.